WASHINGTON, DC—At noon EST on December 14, Governor Larry Hogan and the United States Mint (Mint) Director David Ryder will celebrate the opening of sales for products containing American Innovation $1 Coins honoring the State of Maryland. The coin’s reverse (tails) design pays homage to the Hubble Space Telescope, one of the largest and most versatile space telescopes. The telescope is managed by teams at NASA’s Goddard Space Flight Center and the Space Telescope Science Institute, both located in Maryland.

“We are proud to share this new $1 coin with our fellow Marylanders and the nation, highlighting our state’s contributions to expanding our knowledge of the universe,” said Governor Hogan. “As Maryland scientists are in the spotlight once again in the race toward a COVID-19 vaccine, this coin is a reminder of our state’s incredible spirit of innovation and perseverance in the face of unprecedented challenges.” 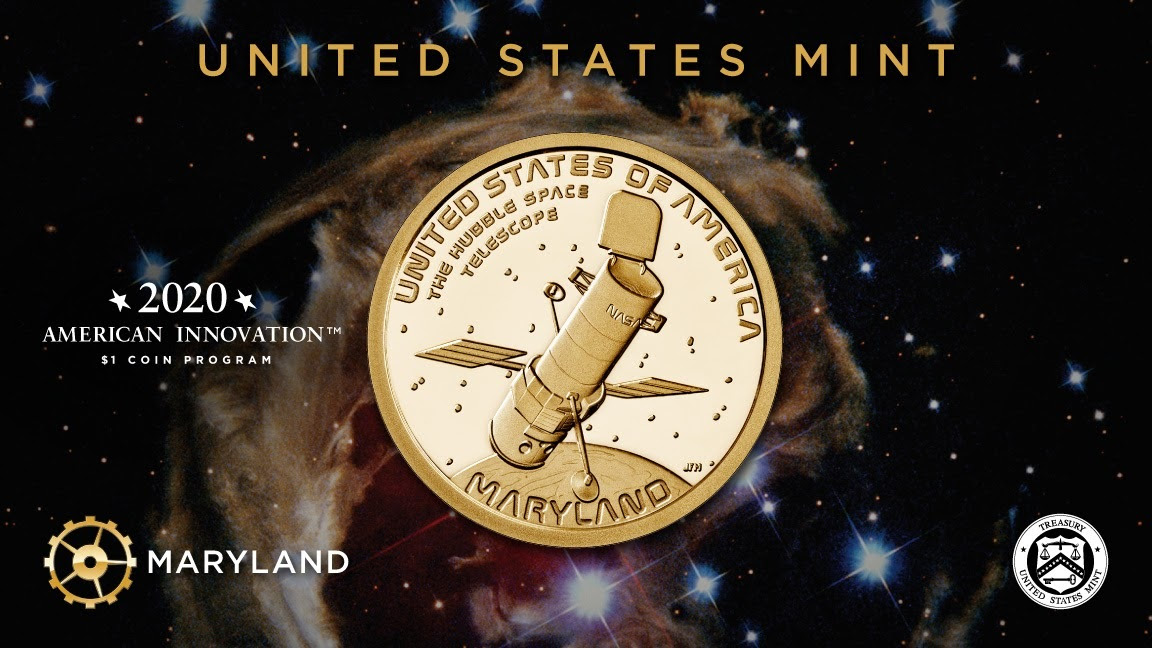 The American Innovation $1 Coin Program is a multi-year series featuring distinctive reverse designs that pay tribute to America’s ingenuity and celebrate the pioneering efforts of individuals or groups from all 50 states, the District of Columbia, and the U.S. territories.

“I’m pleased to celebrate the release of the Maryland American Innovation $1 Coin with Governor Hogan,” said Mint Director David J. Ryder. “The Hubble Space Telescope is an important research tool that provides critical information about the universe, which has led to many scientific discoveries. Data transmitted by Hubble has helped refine estimates of the age of the universe, trace the growth of galaxies, identify and study planets, identify black holes, and observe stars.”

The Maryland $1 Coin reverse design was created and sculpted by Chief Engraver Joe Menna. Menna’s work was inspired by his life-long passion for space, an interest that started in childhood. The design depicts the telescope orbiting the earth surrounded by a field of stars with the inscriptions “UNITED STATES OF AMERICA,” “THE HUBBLE SPACE TELESCOPE,” and “MARYLAND.” The year of minting (“2020”), mint mark (“P” or “D”), and the inscription “E PLURIBUS UNUM” are incused on the coin’s edge.

The obverse (heads) of the American Innovation $1 Coins features a dramatic representation of the Statue of Liberty in profile with the inscriptions “IN GOD WE TRUST” and “$1.” The obverse also includes a privy mark of a stylized gear, representing industry and innovation. Mint Artistic Infusion Program artist Justin Kunz created the design which was sculpted by Mint Medallic Artist Phebe Hemphill.

The bags and rolls of Maryland American Innovation $1 Coins are uncirculated and are produced at the Mint’s Philadelphia and Denver facilities. They can be purchased here.