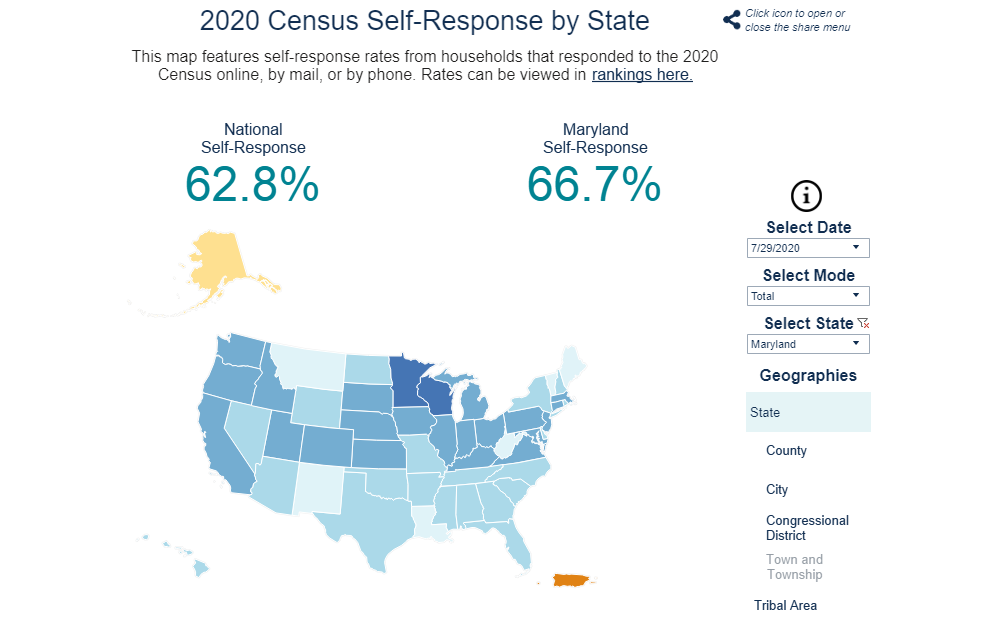 “Our administration is committed to doing everything possible to ensure that every single Marylander is counted this year,” said Governor Hogan. “Every single response directly impacts the services our communities receive—funding for schools, hospitals, roads, and other emergency and essential services all rely on our responses. I urge every single Maryland resident to fulfill their civic duty and help shape our future.”

Several statewide and local initiatives are well underway to encourage Marylanders to respond to the Census, and to remind everyone to fill out the Census before September 30, 2020, including:

“While the Census is about $1.5 trillion dollars in federal spending, including $16 billion to Maryland, the Census is really about us as Marylanders,” said Planning Secretary Rob McCord. “The Census is about who we are as a state and how many people reside in each community. We count people, not just citizens, and this is our one chance for the next 10 years to paint an accurate portrait of Maryland and each of our communities.”

Maryland has adopted a 21st-century approach to the Census. In addition to the significant outreach on social media and as part of virtual and limited in-person events, Planning created several online tools to identify areas that require additional outreach. Governor Hogan, Lt. Governor Boyd Rutherford, and First Lady Yumi Hogan all recorded Public Service Announcements about the 2020 Census, which can be found on the Maryland Census website at census.maryland.gov.

Planning created a Low Response Score and Hard to Count dashboard, which displays socioeconomic and demographic profiles of selected Census tracts, which allows staff to target strategies to improve the Census response rates. Additionally, Planning recently added a map of Food Distribution Centers and Census Tracts by Response Rate. This online mapping application displays Maryland food banks and distribution locations in relation to Census tracts, which staff can leverage to reach Marylanders at sites in low response areas. Planning is also working with the Maryland Food Bank to include informative flyers in meal distribution boxes across the state.

Additionally, Census takers will begin visiting homes that haven’t yet responded to the 2020 Census beginning in early August. All Census takers will wear masks, follow Maryland’s public health guidelines, including physical distancing, and wear an ID badge with their photograph, a U.S. Department of Commerce watermark, and an expiration date.

For more information about the 2020 Census in Maryland, please go to census.maryland.gov.