ANNAPOLIS, MD—At a press conference today marking the halfway point of the legislative session, Governor Larry Hogan announced that he is redesignating his bills to combat the violent crime crisis in Baltimore City as emergency legislation so that they can be signed into law and take effect immediately. To date, the General Assembly has taken no action on the governor’s proposals to combat violent crime, which is the number one priority of Marylanders.

“We are redesignating our violent crime reduction package as emergency legislation and allowing the legislature to take this package, and each of these individual bills, and act on them immediately, so that they can be signed into law immediately, and so that they can take effect immediately to address this crisis,” said Governor Hogan. “We don’t want to hear any more excuses. There cannot be any more delays.”

In December, at a press conference at his office in Baltimore City, Governor Hogan announced expanded legislation to get violent offenders off the streets and address the city’s crime crisis. Today, the governor sent a letter to committee leaders requesting that these crime bills be redesignated as emergency legislation. Read the letter here.

“On the day before this legislative session began, I said that the session needed to focus on increasing accountability and that the most important legislation of this entire session were these bills to hold violent criminals more accountable in order to stop the shootings and the murders in Baltimore City,” continued the governor. “Nearly all the people in every part of the state, in both parties and in every demographic group, strongly agree and support these bills—but still, there is no action.” 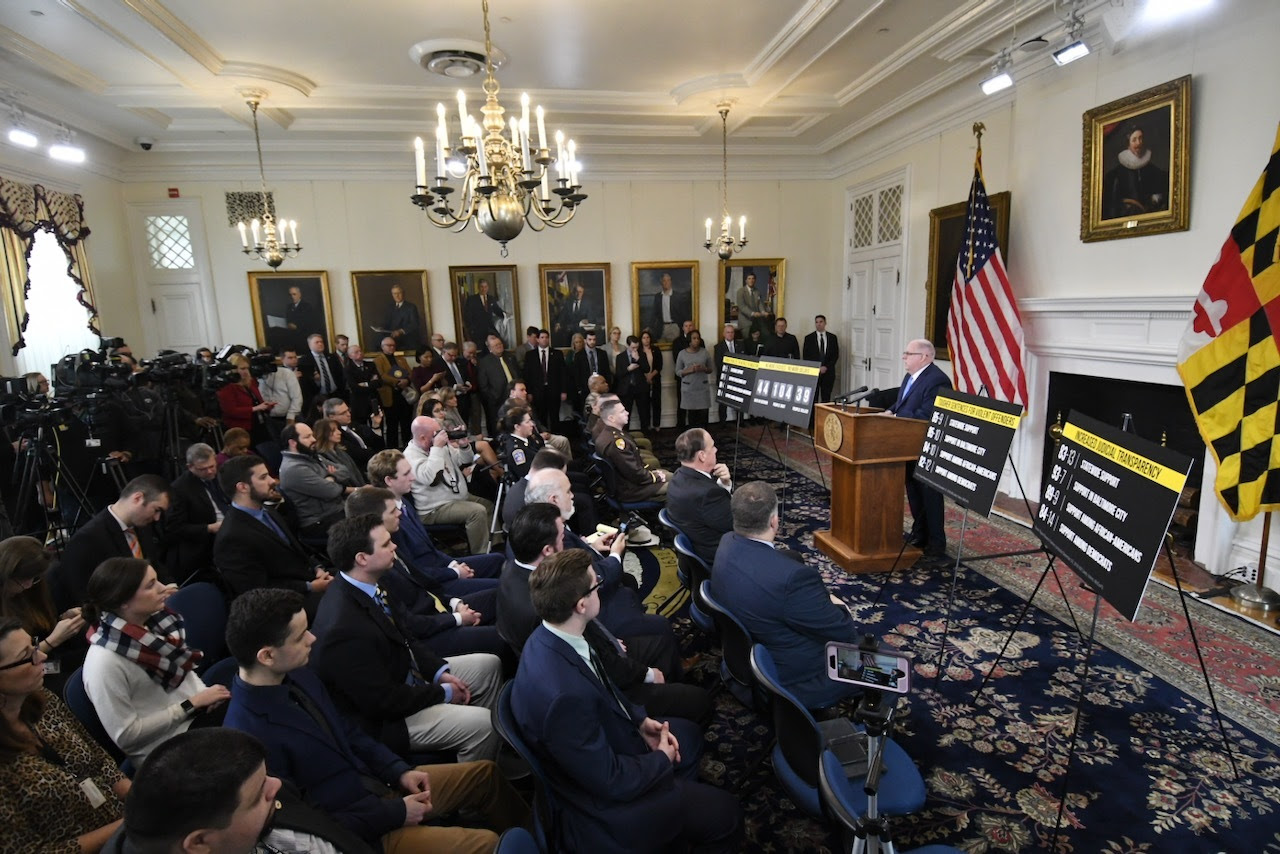 The Violent Firearm Offenders Act significantly increases tougher sentences for violent offenders who commit crimes with guns. This new and expanded legislation will increase penalties for: (1) those who repeatedly illegally carry firearms and for convicted gang members who illegally possess guns; (2) those who illegally transfer guns to people they know intend to use them in a crime; and (3) those who steal firearms, possess stolen firearms, or engage in straw purchasing.

The Judicial Transparency Act requires the Maryland State Commission on Criminal Sentencing Policy to publish sentencing records of judges in violent crime cases to hold the system more accountable to the public for sentencing decisions.

The Witness Intimidation Prevention Act toughens penalties for witness intimidation resulting in serious physical injury or death, and expands the courts’ ability to admit statements made by intimidated witnesses under certain circumstances to all crimes.

“I don’t believe there have ever been bills before the legislature that have ever had more enthusiastic, nearly unanimous support,” said the governor. “The public is literally crying out, pleading with the legislature to take these actions. But halfway through the legislative session, there has been no action. We need to stop playing politics. Pass these bills and get them to my desk so we can begin to stop the killings and get these violent shooters and murderers off the streets and behind bars.”