ANNAPOLIS, MD—Governor Larry Hogan and Agriculture Secretary Joe Bartenfelder celebrated the 50th anniversary of the Taste of Maryland Agriculture event last night by inducting the Rhodes family of Queen Anne’s County and the Richardson family of Worcester County into the Governor’s Agriculture Hall of Fame. Temple and Pat Rhodes and Roger and Fay Richardson accepted the awards in front of more than 700 agricultural leaders and legislators from across the state at Michael’s Eighth Avenue in Glen Burnie.

“There is no doubt about how hard all of our farmers are working for us,” said Governor Hogan. “Your drive, character, work ethic, and resilience during tough times serves as an inspiration to me and to all Marylanders, and I want each and every one of you to know that our administration will continue standing up and fighting hard for you each and every day. Congratulations to all of tonight’s recipients and honorees and congratulations to the Maryland Agriculture Council on 50 successful years of hosting this wonderful event.” Sponsored by the Maryland Department of Agriculture, the Governor’s Agriculture Hall of Fame was created in 1991 by then Governor William Donald Schaefer to honor agricultural leaders who exemplify high standards of achievement and commitment to the industry and their communities. Nominations are accepted at local University of Maryland Extension offices.

“I am honored to join Governor Hogan and Maryland’s agricultural leaders tonight as we celebrate the Rhodes and Richardson families,” said Secretary Bartenfelder. “These two families are outstanding examples of Maryland agriculture’s leadership and commitment to implementing conservation practices while maintaining successful farm operations. Congratulations to this year’s inductees on this well-deserved recognition and thank you for all you have done for Maryland agriculture.”

The Rhodes and Richardson families are the 51st and 52nd inductees in the Governor’s Agriculture Hall of Fame. More information on each Hall of Fame family is available on the department’s website.

About the Rhodes Family 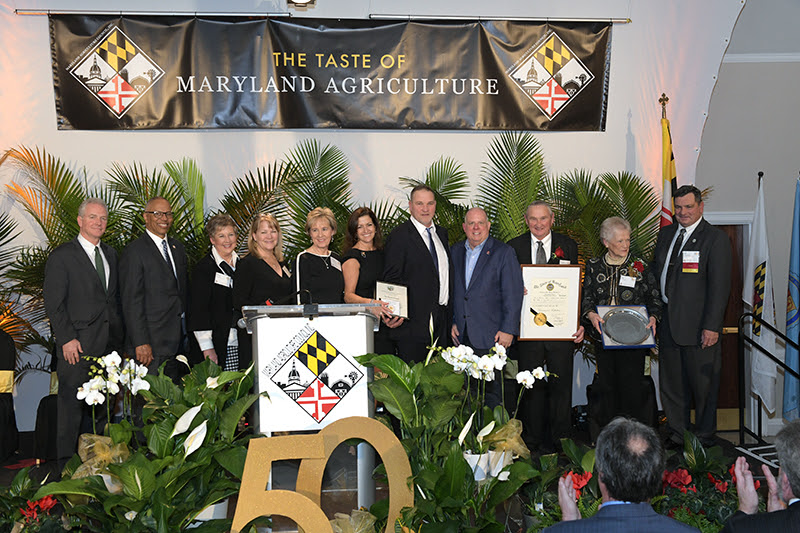 Pat and Temple Rhodes began their family farm operation in 1959 on rented ground in Easton. In 1961, the Rhodes family purchased their first farm, Chestnut Vale, in Centreville. Over the next several years, Chestnut Vale Farm became home to Pat and Temple’s children: Jenny, Betsy, Susan, Carole, and Temple, Jr. The family began with a dairy herd and transitioned to a cow-calf operation in 1968, raising nearly 200 head of angus cattle per year. Throughout his decades of farming, Temple Rhodes remains committed to conservation and has embraced the use of technology and other best management practices to maintain a profitable, environmentally-sound operation.

Pat Rhodes has been involved with the local 4-H club since her children were young, and continues to be an ardent supporter of University of Maryland Extension programs. The Rhodes family is a fixture in the Queen Anne’s County agriculture community, from offering up their land and equipment to support the county fair and other events at the county’s nearby 4-H Park, to their involvement at Our Mother of Sorrows Church in Centreville. The Rhodes’ legacy is one of leadership and commitment that continues with their children and grandchildren, and has left a lasting impact on Maryland agriculture.

A brief slideshow and biography of the Rhodes family are available online.

About the Richardson Family 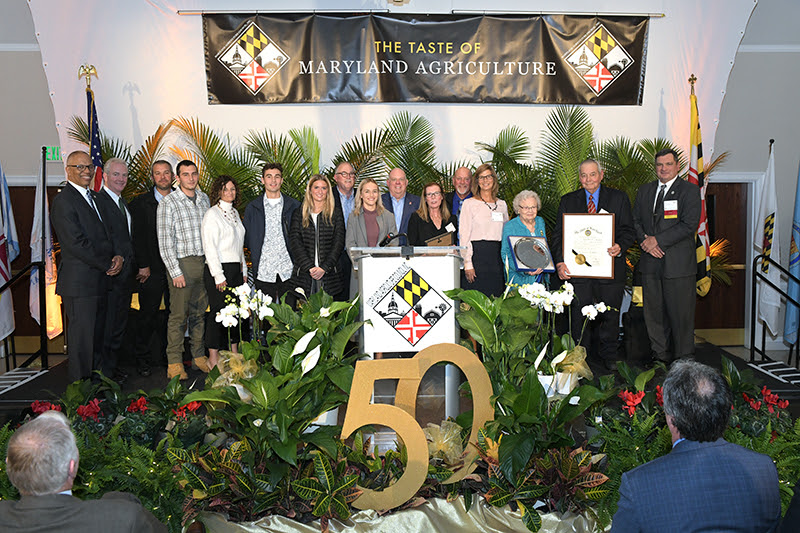 Roger Richardson and his wife Fay have farms in Worcester, Wicomico, and Somerset counties. Richardson Farm dates back to 1767. Roger currently operates the farm with his daughter, grandson, and great-grandson, while Fay has been instrumental in the continued growth and diversification of the family farm business. The multi-generational farm family grows corn, soybeans, and wheat. In 1980, the Richardsons diversified their operation by starting a private trucking company dedicated to the transportation of agricultural products. In addition to precision farming techniques, the Richardsons have adopted both conservation and no-till practices to manage nutrients and meet soil and water conservation goals.

Off the farm, Roger Richardson’s legacy leaves a profound, lasting impact on the state’s farming community. In the late 1970s, Roger was one of 14 men appointed by then Governor Marvin Mandel to create the Maryland Department of Agriculture. Thirty-five years later, then Governor Martin O’Malley appointed Mr. Richardson to serve as Maryland’s Secretary of Agriculture, overseeing the agency he helped create. In addition to his involvement with the department, Roger has held several leadership positions with local, state, and national organizations, including: the Agricultural Stewardship Commission, the Maryland Center for Agro-Ecology, and stints as president and vice-president of the National Association of Farmer Elected Committees. With decades of knowledge and experience, Roger and Fay Richardson continue to support and advocate for farmers on the Lower Eastern Shore, the State of Maryland, and beyond.

A brief slideshow and biography of the Richardson family are available online.

A complete list of Hall of Fame honorees is available online.