ANNAPOLIS, MD—Governor Larry Hogan today honored six Maryland farm families during the 2020 Century Farm ceremony at the State House. This recognition is given to farms that have been owned and operated by the same family for more than 100 years. This year’s ceremony included five Century Farms and one Bicentennial Farm.

“Today is a celebration of agriculture, but it is also about families. By passing down farming as a way of life from generation to generation, each of our six honorees has played a significant role in continuing agriculture as the leading industry in Maryland,” said Governor Hogan. “We are incredibly grateful for all of our Maryland farms, and are proud to celebrate six very special farm families that represent the absolute best of Maryland agriculture.” 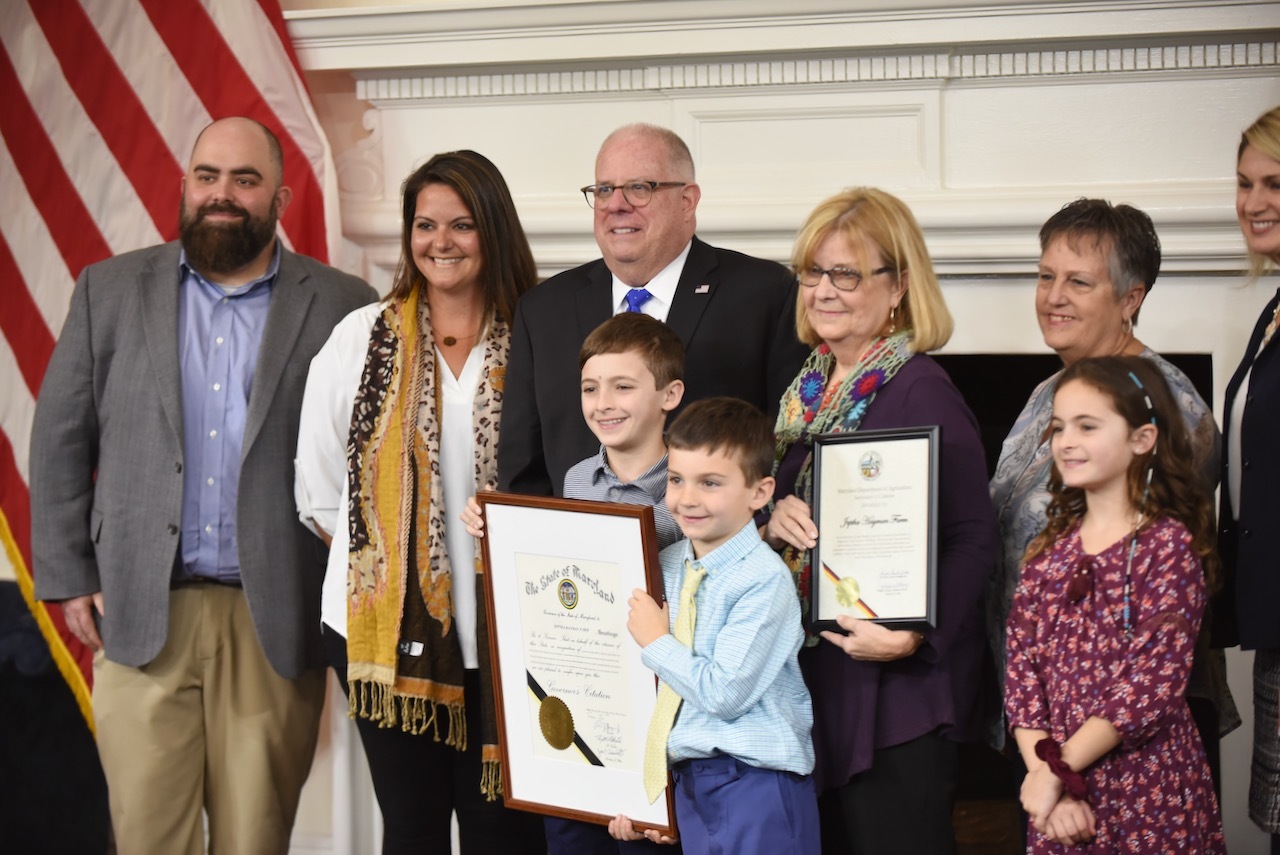 The following farms were designated Century Farms at this year’s awards ceremony:

“Becoming a Maryland Century Farm is no small feat,” said Maryland Agriculture Secretary Joseph Bartenfelder. “This honor is the result of more than a hundred years of hard work, dedication, perseverance, and passion by the families recognized today and their loved one’s that came before them. I cannot thank each Century Farm family enough for what they have done for Maryland agriculture and I congratulate them on this incredible milestone achievement.”

The Maryland Century Farm Program was established in 1994 by Governor William Donald Schaefer to recognize farms that have been in the same family for at least 100 consecutive years; contain a minimum of 10 acres of the original parcel; and have a gross annual income of $2,500 or more from the sale of farm products. The Century Farm Program honors families who have passed their farming operations down from generation to generation, making it possible for future stewards of the land to continue in their family tradition. The Hogan administration re-established this annual tradition in 2017 for Maryland farm families after it had been halted for 10 years.

For more information on the Century Farm program, please contact Jessica O’Sullivan at jessica.osullivan@maryland.gov or 410-841-5882. See below for biographies on each 2020 Century Farm designee.

Chaffey Farm (Marion Station, Somerset County)
This 60-acre farm was purchased in 1919 by William Chaffey, Sr., who was the great grandfather of the farm’s current owner, Matthew Chaffey Powell. Matthew inherited the farm in 2001 from his grandmother, Helen Chaffey. The original farmhouse was built before 1877, and was expanded around 1900. The house still stands and is the current home of Matthew and his family. Along with the original house, a milking parlor, machine shed, and manure shed still remain on the property. Through the years, the Chaffey family has grown strawberries and green beans, in addition to raising dairy cows and chickens. The farm currently grows corn and soybeans.

Evergreen Heritage Center (Mount Savage, Allegany County)
This 131-acre property was originally purchased in 1869 by Joseph Arnold Trimble and his brother, Enoch. It is currently owned by Joseph’s great-granddaughter, Janice Keene. The original farmhouse and barn were built in 1780, and are now being used as a museum. The farm raised cattle, pigs, sheep and chickens on the property until the 1950s. Today, Evergreen Heritage Center grows apples, plums, peaches, tomatoes, potatoes, corn, and a variety of other vegetables. The center is a longtime advocate for conservation farming and forestry. The farm has received several awards recognizing its contributions to environmental protection and educational programs. Today, the farm is used for agricultural education programs and a variety of agritourism activities, with more 9,800 participants annually.

Jeptha Hayman Farm (Westover, Somerset County)
Daniel and Sallie Benson purchased this farm on April 16, 1834. In 1871, the farm was transferred to their daughter, Sally Benson Hayman, and her husband, Jeptha Hayman. The farm is currently owned by their great-great-granddaughter, Sharon Upton. Over the years, pottery shards from the 18th and 19th centuries have been found on the farm in addition to Native American artifacts. The original farmhouse and smokehouse were built in 1836, and are still in use today. The farmhouse has won a Maryland Historical Trust Project Preservation Award for its restoration and is now being awarded the Century Farm Historic Structures Award. Jeptha Hayman Farm is 92% cropland and 8% woodland. The farm currently grows corn and soybeans. Livestock raised on the farm over the years have included pigs, horses, chickens, and cows.

Poplar Springs Farm (La Plata, Charles County)
Conrad Dyson purchased Poplar Springs Farm in 1914. The farm is currently owned by his son, George C. Dyson, and his wife, Ruby. The farm’s rich history dates back to the 1600s when it is believed that Lord Baltimore gave the original tract of land to Robert Troope in exchange for his participation in the Battle of the Severn. The original boundary stone still exists on the farm and is mentioned in deeds going back to the 1700s. The farmhouse and cow barn on the property today, built sometime between 1880-1910, are being awarded the Century Farm Historic Structures Award. The farm has historically raised a variety of livestock and grown tobacco, field corn, wheat, and soybeans. Poplar Springs Farm currently grows hay in addition to breeding beef cattle and horses.

White Hall Farm (Dunkirk, Calvert County)
Currently owned and operated by Tiffany and Todd Durbin, this Bicentennial Farm has been in the family since 1801 when it was originally purchased by Thomas W.B. Smith. Mr. Smith was the founder of Smithsville, Maryland, now known as Dunkirk. The original farm covered more than 168 acres and is currently 75 acres. Information related to the origins of the land is unclear due to the loss of records when the Calvert County courthouse burnt down in 1882. White Hall Farm hosted the first ever Calvert County Fair on its grounds in 1886. The farmhouse was built in 1801, and is being awarded the Century Farm Historic Structures Award. Additionally, there is one tobacco barn on the property that is still standing in its original structure, and two more tobacco barns that were built in 1900. Throughout its 200-year history, White Hall Farm has grown tobacco and raised cows, horses, chickens, and goats. The farm currently grows poultry, corn and soybeans. Todd Durbin is a veteran of the U.S. Army and participates in the Farmer Veteran Coalition and Maryland’s Best Homegrown By Heroes program.

The Wil-Low-S at Lowe Point (Pylesville, Harford County)
Rufus Low purchased this Harford County farm in 1902. His great-granddaughter, Ruth Ann Lowe Smith, currently owns the farm with her daughter, Jennifer Wilson, and her husband, Adam. The Wil-Low-S at Lowe Point features a farmhouse built in 1903, and a bank barn built in 1916. Other structures, including the wagon shed, granary, corn crib, and smokehouse, pre-date the farmhouse. Historically, the farm has grown apples and peaches, and continues to grow hay and row crops. The Lowe family has also raised dairy cows, beef cattle, hogs, and chickens over the years.