Here’s What They Are Saying: 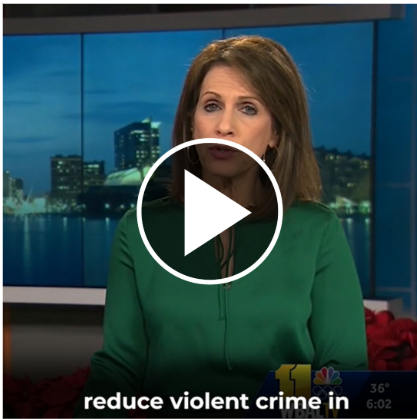 “A Series of Bills Targeting Crime” The Baltimore Sun: “Hogan announced last month that he would introduce a series of bills targeting crime, including one to increase penalties for people who give or sell guns to someone they know will use them to commit a crime. Another would increase penalties for intimidation that results in death of a witness or serious injury, and a third would require a report on sentences handed down by judges.” (Pamela Wood and Luke Broadwater, “8 key issues facing Maryland lawmakers during the 2020 General Assembly session,” Baltimore Sun, 1/7/20)

“Bills to Combat Violent Crime” WGMD: “Governor Larry Hogan has introduced a series of legislation to combat violent crime in Maryland. The Governor’s crime package, which he first announced last month at a press conference in Baltimore City, includes tougher sentences for violent offenders who commit crimes with guns, stronger penalties for those who intimidate witnesses, and more transparency to hold judges accountable for their sentencing decisions.” (Rob Petree, “Governor Hogan introduces bills to combat violent crime in Maryland,’” WGMD, 1/21/20)

“A Package of Legislation to Fight Crime” WBAL NewsRadio: “Gov. Larry Hogan, a Republican, has proposed a package of legislation to fight crime in the city, including funding for 25 new prosecutors and support staff for the attorney general to prosecute violent crimes. He also wants stronger penalties for repeat gun-violence offenders and for witness intimidation.” (AP, “’Rome Is Burning’: Baltimore Crime Gets Lawmakers’ Attention,” WBAL NewsRadio, 1/9/20)

“Focused On The City’s Crisis of Violent Crime” Baltimore Business Journal: “Hogan also focused on the city’s crisis of violent crime, which was cited as the top concern for Marylanders, the governor said. He said the 12 shootings — with five homicides — on Saturday alone in the city was the latest example of the urgent need to clamp down on the violence. He unveiled plans to infuse millions of dollars of new funding into law enforcement efforts statewide and in Baltimore.” (Melody Simmons, “Hogan’s proposed budget includes money to fight city crime, fund Howard Street Tunnel,” Baltimore Business Journal, 1/14/20)

“Tougher Sentences for Violent Offenders” WBFF: “Violent crime in Baltimore is much on the minds of Gov. Larry Hogan and state lawmakers. The governor recently unveiled a series of initiatives to crack down on repeat violent offenders, and Republic leaders plan to unveil their own crime bills. One calls for tougher sentences for violent offenders.” (Bryna Zumer, “A closer look at Gov. Hogan’s plans to fight Baltimore crime,” WBFF, 1/14/20)

“Prosecute More Gun Violence Cases” Maryland Matters: “Hogan announced that he would be infusing city agencies and the Office of the Attorney General with additional funding to pursue and prosecute more gun violence cases through fiscal year 2021 budget proposals.” (Danielle E. Gaines, “Hogan Lays Out Plans to Address ‘Out of Control Violence in the Streets,’” Maryland Matters, 12/11/19)