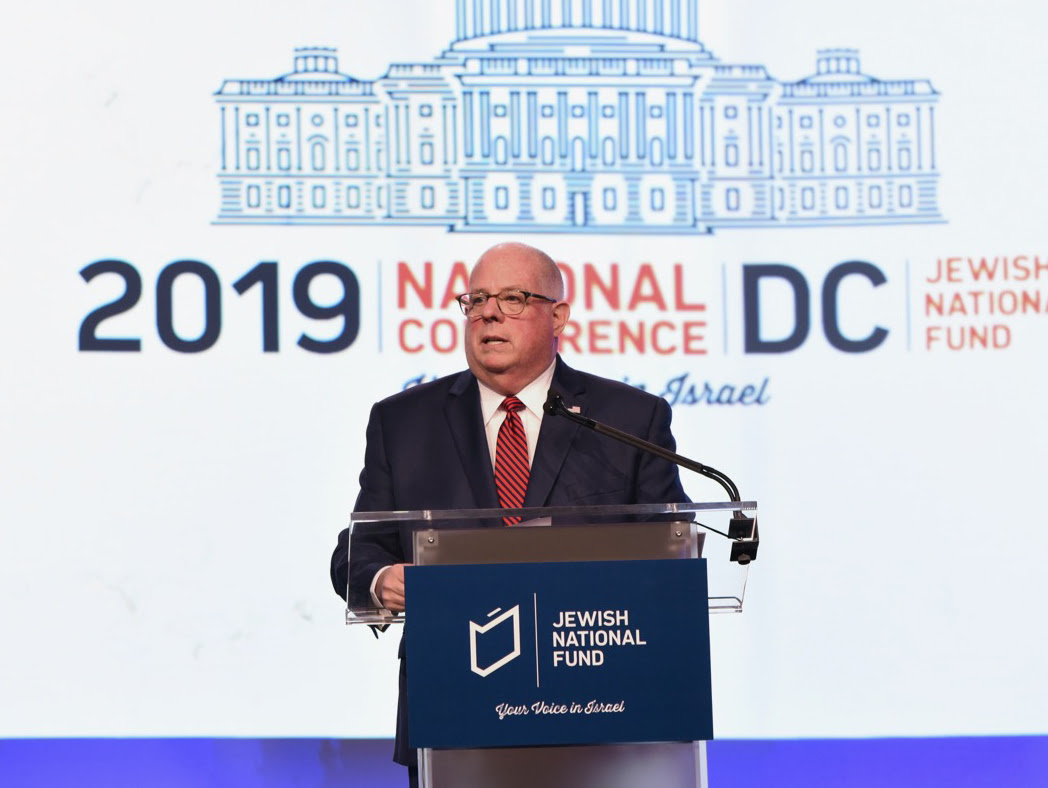 The following are the governor’s remarks as prepared for delivery:

“It is an honor to be here.

I want to thank JNF’s president, Dr. Sol Lizerbram, and CEO Russell Robinson for inviting me and for the important and visionary work JNF does to build a bright future for Israel and its people.

I also want to recognize your conference co-chairs: Gary Kushner and Jayne Klein. I’m very proud to say that both of them are Marylanders.

Jayne, let me just take a moment on behalf of all the people of Maryland to again extend our deepest sympathies to you and your family on the tragic loss of Andy earlier this year.

Andy Klein was not just beloved by all of you at JNF for his incredible work on behalf of this great organization, but by literally everyone who had the honor to know him. Andy was selfless, generous, and so incredibly passionate about helping others.

While he will continue to be deeply missed, he will not ever be forgotten. Andy’s enduring legacy will continue to live on through Jayne and the rest of his loving family, through all of you and the important work of JNF, and through the countless lives he touched throughout his remarkable life.

We are proud of the long shared history between Maryland and Israel, going back to when the famous ship Exodussailed from Baltimore’s harbor on its historic mission to rescue Holocaust survivors in Europe and take them to the Jewish homeland.

Every day that I have been Maryland’s governor, I have been a strong supporter and advocate, not just for Maryland’s Jewish community, but also for the state of Israel, which is one of America’s best and most important allies.

And we negotiated the first-ever sister-state relationship between the state of Maryland and the Negev region, which is the cybersecurity hub of Israel, to share information and technology, to strengthen the security of Israel, and to further solidify Maryland’s standing as the cyber capital of America.

And even though the main focus of our trade mission was economic development, we also got the incredible opportunity to experience time in Old Jerusalem and visit the Western Wall, where I prayed and took part in the sacred tradition of placing a prayer note in the wall.

We shared a wonderful Shabbat dinner, and, as Viv mentioned, I was proud to take part in a tree planting ceremony with JNF, planting a tree in memory of the late Governor Marvin Mandel, my good friend and Maryland’s only Jewish governor.

The entire trip was incredible, but the most memorable experience was my visit to the Yad Vashem Holocaust Memorial Museum in Jerusalem, where I participated in a wreath-laying ceremony in remembrance of the more than 6 million victims of the Holocaust. I was moved to tears, and it was truly an experience that I will never, ever forget.

I know that what brings each and every one of you together for this conference every year is your strong connection to and your unwavering support for Israel.

In Maryland, we have worked tirelessly these past five years to strengthen our already strong relationship with Israel.

I have strongly and repeatedly made it very clear that Maryland will stand steadfast in solidarity with Israel against the BDS movement. In 2017, I signed an executive order prohibiting all executive state agencies or departments from entering into any contracts with any business unless that business certifies that they will not engage in a boycott of Israel.

Recently I had the honor of being elected by my colleagues as chairman of the National Governors Association.

In leading the nation’s governors, I will work together with both Republicans and Democrats to reinforce our nation’s commitment to supporting our closest allies, beginning with the state of Israel.

I will encourage leaders in every state to follow our lead by taking actions to protect Jewish communities and schools.

In Maryland, we enacted legislation which established a fund to make grants for security-related projects available to schools and childcare centers determined to be at risk of certain hate crimes or attacks.

Sadly, we have seen far too many brutal acts of anti-Semitism, bigotry, and hatred in our nation.

Last October we were all heartbroken when 11 members of the Tree of Life Synagogue in Pittsburgh became the victims of an unconscionable and violent act of hatred.

I immediately reached out to Governor Wolf, our neighbor in Pennsylvania, and to leaders of our Jewish community all across our state to offer not just our prayers, but also whatever assistance we could possibly provide.

I immediately directed Maryland state law enforcement agencies to increase their patrols and their vigilance in protecting our synagogues and places of worship.

The right of each and every one of us to worship and practice our faith freely is a founding pillar of our democracy. Our synagogues and other places of worship must never become places of fear. An attack like that, which cuts at the very heart of our values as Americans  and as human beings, is not just an attack on the Jewish people, but an attack on all of us.

In this battle between good and evil, there can only be one side to stand on, and that is to stand for love and goodness, justice and unity.

Ladies and gentlemen, in spite of all the things that work to tear us apart, I still believe that what unites us truly is greater than that which divides us.

Jewish tradition teaches the concept of tikkun olam—that individual acts of goodness can help to heal a broken world, that small acts of kindness and decency truly can make a real difference. It says that each and every one of us has a responsibility to try to fix a little piece of what is wrong with our world.

The best way to change hearts and minds—to end the inexplicable hate—is by showing love and kindness and leading by example.

Andy Klein certainly believed that, and that is the way he lived his life. His daughter Rachel said her dad “did and gave everything to anyone who needed anything.” Jayne said that “whatever he did, he put his whole heart into it.”

What an incredible and inspiring legacy to leave behind.

Each and every one of us has the opportunity to do something great and to try to fix a little piece of what is wrong with our world, just as Andy Klein did his whole life and as the JNF does every single day.

You give a vision and a voice to Jewish people everywhere.